We’d like to give a warm welcome to Kate Pankhurst who shares an enlightening piece about a phenomenal lady and one who is featured in her inspirational new book Fantastically Great Women Who Changed the World.

I’d never heard of Agent Fifi before I started my search for a World War Two heroine to feature in Fantastically Great Women. I thought such a significant period in history should be explored through the achievements of female contribution to the war effort.

My editor at Bloomsbury, Claire Grace, suggested a female secret agent she had come across while working on a previous non-fiction title – Agent Fifi. Not much was known about her apart from that she was involved with the top secret work of training British spies to be the best in the world.

Agent Fifi?! Her name said espionage, code cracking and top secret missions to me. A sucker for a good female spy meant the decision was made. Fifi must feature in Fantastically Great Women. (A lover of the mystery genre since childhood, my previous published work features a fiction series starring the daring, young super sleuth, Mariella Mystery. Her case files include the Ghostly Guinea Pig and the Disappearing Dinner Lady.)

Undercover work to discover the secrets of the mysterious Agent Fifi began. It turned out that files detailing the work of Fifi, or Marie Christine Chilver as she was known before her new identity, were only made public in 2014. (The files are available from the National Archives.)

The files, scanned images of the typed documents on yellowing paper sent between Fifi and the Special Operations Executive (the SOE’s job was to infiltrate enemy lines by using sabotage and subversion), were such a tactile insight into the past that I was transported back to the 1940s.

I imagined Fifi’s hands clickity-clacking across typewriter keys as she reported back on the success of her missions. Possibly while drinking tea from a bone china mug and eating a biscuit. 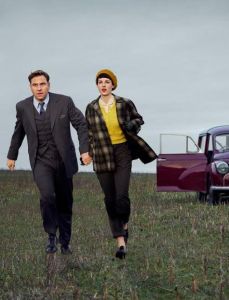 For illustration inspiration I couldn’t help but be reminded of the BBC adaptation of Agatha Christie’s Partners in Crime. I used Tuppence Beresford’s look (played by Jessica Raine) to inspire my illustration of Fifi, because every wartime spy needs a yellow beret to look the part.

In essence, Fifi’s job was to see if British trainee spies could be trusted to keep a secret, something young readers can identify with. (Nobody likes a blabber mouth.) Fifi was selected for her role after the SOE heard the story of her skilfully escaping from a Nazi Prisoner of War Camp during the German occupation of France. She was deemed to have exactly the sort of astute qualities and brilliant mind needed to test the abilities of British spies.

Fifi was known as an agent provocateur. That has ‘oo la la’ sorts of connotations in the modern interpretation of the phrase. But an agent provocateur in World War Two wasn’t anything kinky. Fifi used her adept undercover skills to provoke spies, who were thought to be the best there was, to blab and spill the beans. Fifi tested the skills of both male and female trainee agents and her role wasn’t to be a seductress, although she may have, on occasion, used her feminine charms to her advantage.

One of my favourite exchanges between Fifi and the SOE was her rendezvous with a trainee spy at the giraffe house in London Zoo! Picturing the scene of Fifi carrying out her top secret work while giraffes passed by
made me smile.

The sometimes ‘more tea vicar’ nature of Fifi’s reports aside – her work may not have been on the front line of the war effort but that didn’t make it any the less vital to saving lives. Fifi’s opinion of whether trainees were up to the job or not was respected within the SOE. She held a position of great responsibility in saving lives. If unsuitable trainees made it through the selection process official secrets could fall into the wrong hands and lives could be lost. That knowledge must have weighed heavily on Fifi as she carried out her work.

After the war, Fifi left her secret identity and work behind and returned to being Marie Chilver. Marie led an ordinary life and was never able to speak about the top secret work she did to help the war effort. That gave me all the more reason to include her story in Fantastically Great Women, because without women like Agent Fifi, or Marie Chilver history may have been very different.